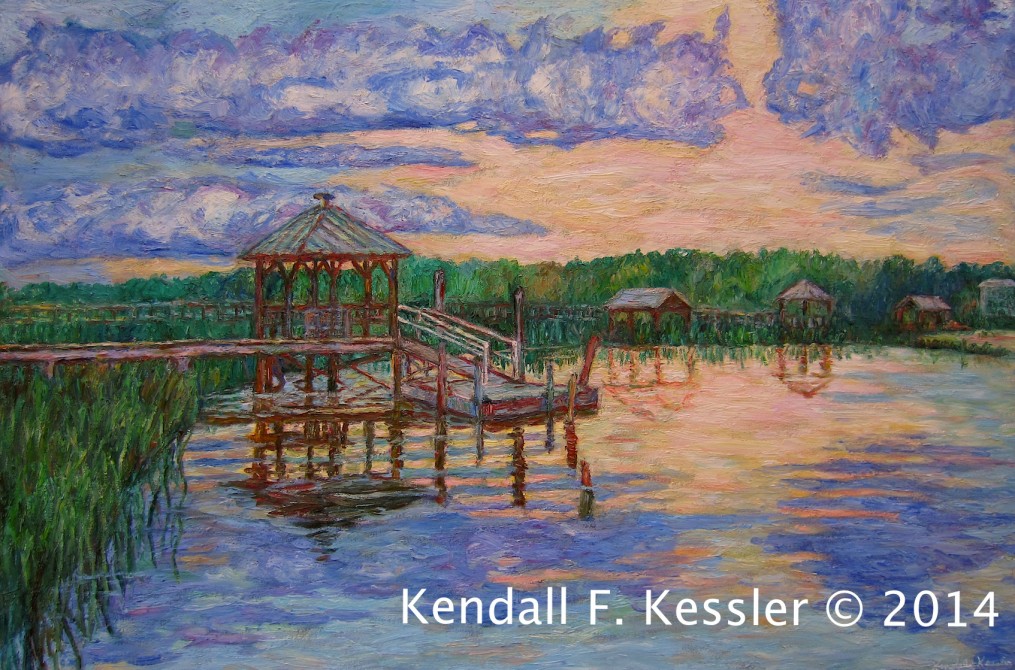 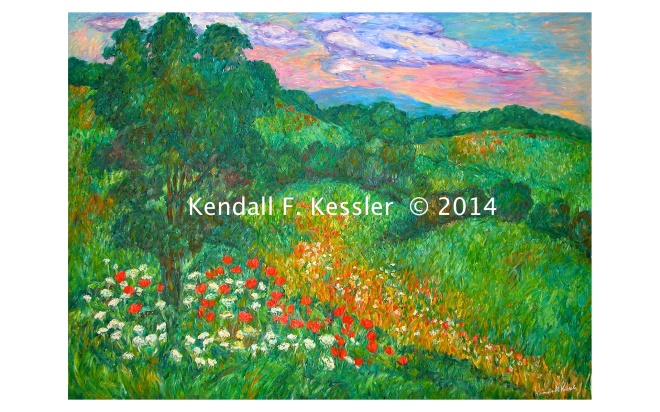 I keep thinking I am going to move on to other interesting aspects of the New River Valley and The Blue Ridge Parkway and then I find another ghost story to share!  Ghost stories are so much fun and I didn’t know about any of these until this year!

Here is another Roanoke one!

At The Patrick Henry Motel there are a number of ghostly apparitions. The Motel was built in 1925 and there are three ghostly men that supposedly hang around the ball room to keep an eye on things.

On the second floor there is a man with a pipe that sits at one of the tables. Some people say he kicks the tablecloth with his foot.

Many people claim they feel the presence of an elderly woman who died in one of the rooms!

I found this information on the online publication, Haunted Places.

When I was working on my Master’s degree I worked for a professor that had a huge poster of Murphy’s Law.  He said a friend gave it to him.  I read the whole poster and have never forgotten all the things that this mysterious Murphy does to us.

Sometimes I feel like Murphy is stalking me!   My latest example of how, if anything can go wrong, it will, involves my favorite sport.

I have been skating since I was a child and my sister is so accomplished that she teaches ice skating in Sterling, Virginia.

Since there isn’t a skating rink nearby I have been roller blading for many years in Christiansburg.  The rink closed down but a few years later a fantastic one opened near the old one.   The boot on one of my skates finally cracked apart and I had to buy new ones.

I have never liked the new ones so a while ago I ordered a very expensive pair that I knew would be great!

The next day my new skates showed up!  AAAARGH! 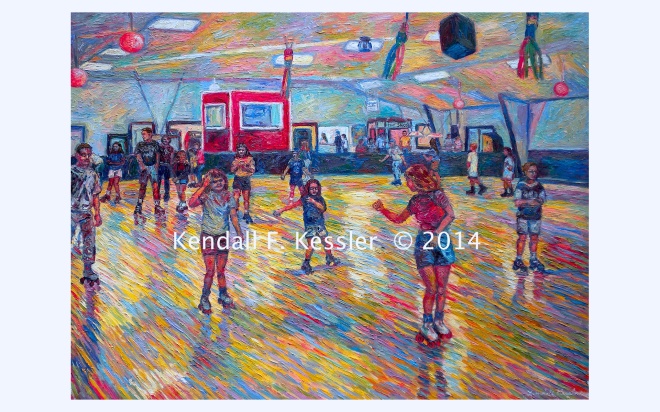 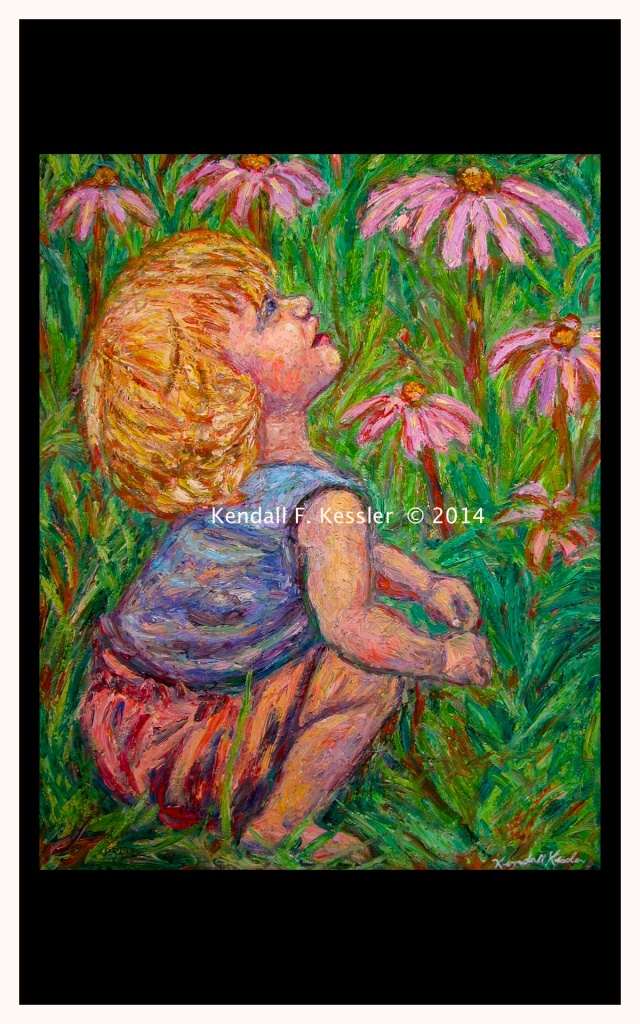 Since my husband is on a computer eight hours a day he knows more than I know.  We did not grow up with them so we are baffled at times.  Now I am trying to figure out a Yoast plug in that I downloaded.

So far we aren’t cussing the computer but I think we will be soon!  I wish one of us was a computer whiz!  I hate how we have to call on someone that is our son’s age to help.  Such is life! 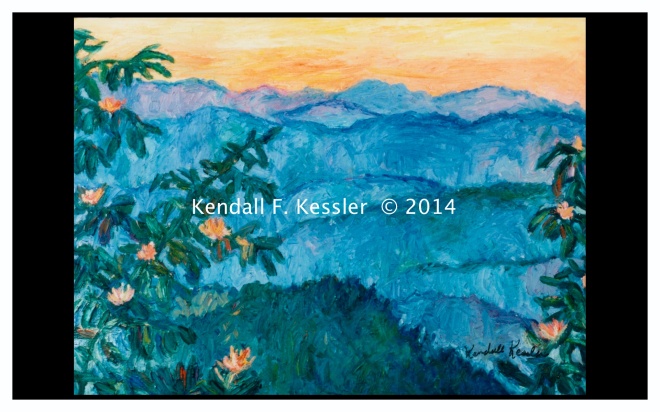 The Very Blue Ridge  Original Painting has been sold

Prints on paper or canvas available at     KENDALL KESSLER ART

So far I have two paintings from The Great Smoky mountains of North Carolina.

They are a subrange of the Appalachian Mountains, and form part of the Blue Ridge Physiographic Province which is why I entitled the above painting, The Very Blue Ridge even though it is a range in the Smokies.  Both of them have been sold, but, as always, large and small prints on paper or canvas are available on my website.

There are a lot of myths and legends about North Carolina mountains.

Brown Mountain is a low ridge in Burke County that is a showcase for one of the last, great unexplained phenomena in the world.

During the night, usually in autumn, mysterious glowing orbs can be seen to rise up off the mountain, hover and wobble about fifteen feet up in the air, and then disappear.

There’s no denying that the lights are real. They have been observed by countless witnesses and photographed on many occasions. But what they are is still unknown.

Explanations have varied over the years.

The Cherokee were aware of the lights, and claimed that the lights were the souls of Cherokee women searching for their men who had died in a great battle between the Cherokee and the Catawba that took place on Brown Mountain.

Other legends say that the lights are the the ghostly echoes of lights that appeared during a search for a murdered woman in the 19th century.

I got this legend from Brown Mountain Lights on the online publication, North Carolina Ghost Stories and Legends 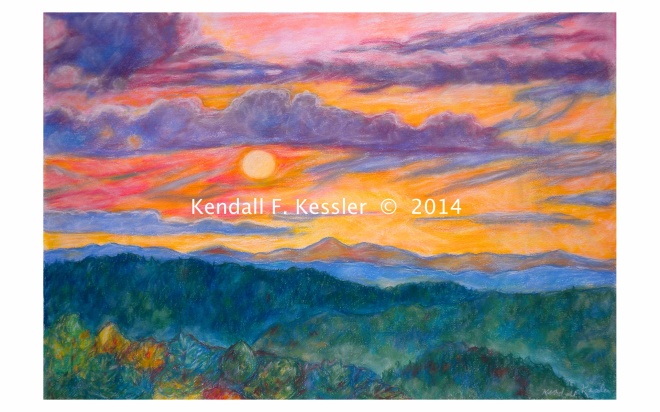 Prints on Paper or Canvas available at    KENDALL KESSLER ART

Life with the Word and Bird Man – Clyde Kessler

I love to skate.  I have been skating for most of my life but a number of years ago I decided I should quit because I feared getting a bad injury.  I took up Line Dancing and loved it but missed skating.

This year I decided to go back and just skate when there aren’t a lot of people at the rink and wear pads.  I read on the Internet that skating is actually one of the lower risk sports and would be even lower if people would wear pads.

I still get nervous due to skaters that can’t skate very well and reckless skaters.

The other day a bunch of teen-age boys were skating at break neck speed and playing tag.  I told my husband it would be great if rinks had adult skates like pools so I could skate in peace.

His reply was they should have a session for all the macho skaters that want to see who can fall the hardest without mangling himself.  The words he used were more colorful but I strongly believe in G-rated posts!  Although I will post an occasional tasteful nude.  It’s art!