Prints on Paper or Canvas available at   KENDALL KESSLER ART

This painting is of a beautiful section of Mountain Lake Resort in Giles County, VA.  This popular resort was the setting for the great movie, Dirty Dancing, starring Patrick Swayze!

Beneath the grounds of Radford University there is a network of tunnels that used to be used by students so they wouldn’t have to go out in bad weather.  The school was originally a girl’s college.

There is a ghost story about one student that prowls the tunnels on Hall o’ ween.

The tunnels were closed long ago and entrance to them is forbidden.

The girl’s name was Elizabeth and she shunned the other students. They played tricks on her and sent her a note claiming a suitor wanted to see her at the Hall o’ ween ball dressed as a princess and he would be her prince.  She went to the ball and waited. He never appeared but a student handed her a note that requested she meet him in the tunnels.  It was dark and she tripped and broke her neck and died instantly.

The legend is that she prowls the tunnels calling for her prince every Hall o’ ween!

This story was written by Richie Ellis and printed in The Haunted Commonwealth online publication in 2010.  The story is more complicated if you would like to check it out!

Prints on Paper or Canvas Available at     KENDALL KESSLER ART

This painting is based on a photograph my husband took of someone picking mushrooms at Pandapas Pond.  Oddly enough, the man resembles my husband. 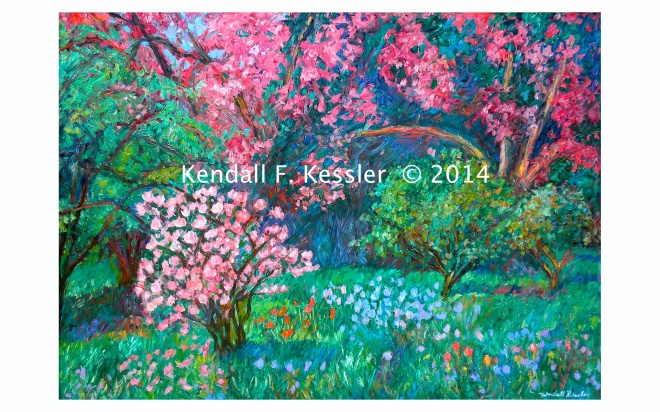 Prints on Paper or Canvas Available at   KENDALL KESSLER ART

Since I am writing about New River Valley ghost stories lately, I thought this haunting painting would be great for this post!  This painting is loosely based on a photograph I saw of a scene that reminded me of my grandmother’s beautiful grounds in her home in Clarksville, Virginia.  When I look at this painting I am reminded of our special visits to her home.

One of Those Faces

All of my life people have told me I look just like a relative or friend.  It has never bothered me that I just have one of those faces but now I like to make a joke out of it.

The other night at a Chick Corea concert at Radford University it happened again.  A lady in the seat behind me asked me to forgive her for staring but I look so much like her sister.  We discussed backgrounds and hers was mostly Irish while I am half Italian but I do look more like my mother’s Scottish and Irish side.

When the concert was over I looked over to the lady and said, “You must have a beautiful sister!”   She said she did and we both laughed –  but not too hard, of course!

My husband is at it again publishing poems!  This week he had five poems published in Still: The Journal.  This is the second time he has had work published there and this online magazine won the 2014 E-Appalachia Award!

Also, another bird count is coming up in Franklin County on April 26th.  There are teams that have mapped out locations to survey.  People are welcome to join the effort.  If you are interested contact my bird man at ckessler@vt.edu!

I am so pleased to sell a large metal print of Mid-Spring on The New River to a great patron in Mississippi!  This is one of my favorite oil pastel paintings.  I am especially pleased with all the nuances of green that emphasize this special time of the year in the New River Valley.  It isn’t summer yet so a lot of the greens are not as bright as they will be.

This pastel was done from a photograph I took of the New River from Bisset Park in Radford, VA.  I have walked the trails at the park countless times with my family and on my own.  I love to watch the rapids and my naturalist husband, Clyde, is always on the look out for bird and butterfly populations.  I especially like to watch the many different colors of light filtering through the leaves and reflecting off of the water.

The New River is actually one of the world’s oldest rivers and there are many fascinating stories about it.  It is a very dangerous river and legend has it the Native Americans call it the river of death.  Many years ago when I was teaching at Radford University, two boys swam across it near the Dedmon Center and drowned.  It looks so peaceful but the rapids and strong currents are not to be tangled with.

Life with the Bird and Word Man

On a much lighter note, as usual, I decided to tease my husband.  Due to the very cold weather we had to let  our faucets drip very slowly at night so the pipes wouldn’t freeze.  I almost always have to get up at night to go the bathroom and my husband often wakes up at that time.  I told him the faucets were leaking and he would have to get busy and fix them.  All five of them were dripping.

His reply was, don’t you mean six?

Okay, I don’t mean you, just the faucets.

I don’t really think of my husband as a Drip.  Just like to goad him.

Some Facts about the beautiful New River

The New River is between 10 and 360 Million years old. It is one of the world’s oldest rivers and is the oldest river in The US.

It flows from south to north.  Only a few rivers in the world have this unique feature, including the Nile.

Mary Draper Ingles was an American pioneer and early settler of western Virginia. She was abducted by Indians and later escaped, making a harrowing trek over hundreds of miles of rough terrain to return home. She followed the Ohio and New Rivers. She was born in 1732 and died in 1815.

The Long Way Home Drama ran from 1971-1999 here in Radford, VA.  There is talk to bring back this wonderful outdoor historical play!

The first commercial rafting trip took place in 1968.  The Dragan brothers started it when they founded Wildwater Unlimited.

The New River was designated a national river in 1978 and an American Heritage River in 1998.